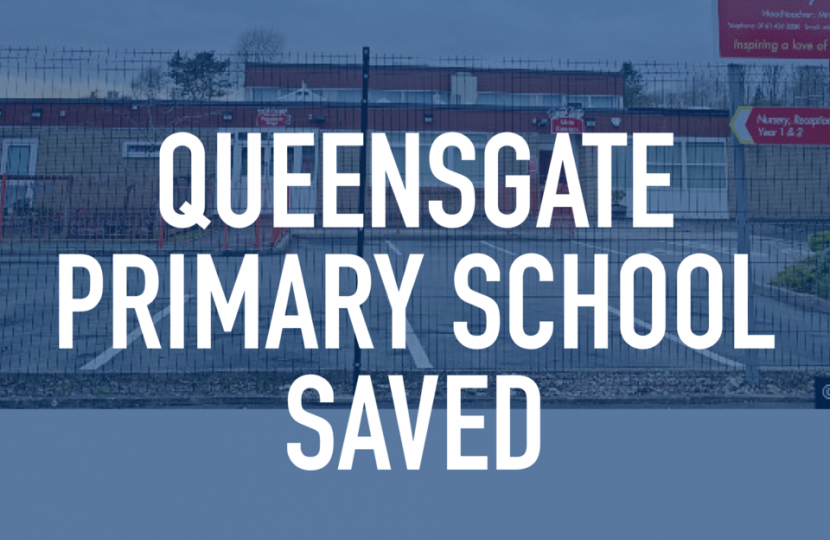 The news comes after Bramhall Councillors John McGahan, Brian Bagnall and Mike Hurleston and I launched a campaign to save Queensgate Primary School from closure and relocation to Woodford, throwing our weight behind local residents who are campaigning against the closure of the Bramhall site. Overwhelming opposition from the ward Councillors and local residents included a petition signed by over 800 people locally. The school will be staying open on its present site and a new school at Woodford garden Village, due to be completed in late spring 2022, will open to pupils from September 2022.

Plans to expand the primary school resulted in a controversial proposal to relocate the school in its entirety to a new site at Woodford. The Garden Village, currently under construction on the former aerodrome site, has planning permission for 950 houses and a condition requiring a new school to be built to accommodate children from the development and the wider area.

Criticism of the original proposal was strongly voiced by local residents, who are concerned about the uprooting of the local school community, the impact on pupils with special needs, the lengthy journey across busy roads and a resulting increase in car usage due to the lack of viability of a walk-to-school plan.

The report, which was commissioned by Stockport Council and presented to them this week, recommends keeping Queensgate Primary School in its current location on the ‘Australia Estate’ in Bramhall and supporting the opening of a separate primary school in Woodford. Stockport Cabinet voted in a meeting on 20th July to vote to follow the recommendation.

I am delighted that after our collective campaign with parents and councillors, a sensible solution for the Queensgate Primary School community has been found. We have repeatedly said that the proposal to move the school would have a very negative impact on the children forced to make a much longer journey to school.

The recommendation that the school remain on its current site will be a huge relief for pupils and parents.

I would like to extend a big thank you to the local community and Cllrs John McGahan and Brian Bagnall  and Mike Hurleston for joining me in campaigning on this - pupils must continue to be kept at the heart of all decisions.

As we move into a New Year, it is often a time to look back and reflect on the previous year. 2021 has certainly been another extraordinary year with the Covid pandemic affecting all our lives, but it is now time to move forward.