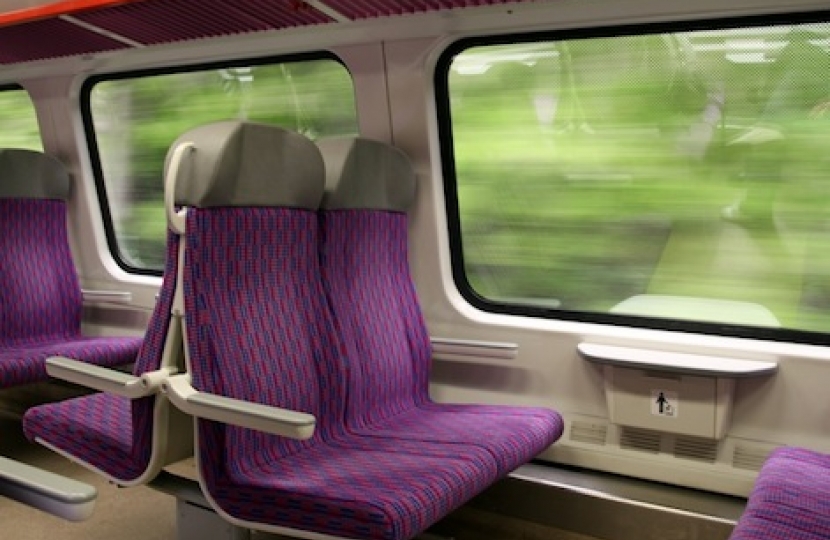 I beg to move, that this House has considered Transport infrastructure in South Manchester.

It is a great pleasure to serve under your chairmanship today, Ms Anne Main, and to see Members from both sides of the Chamber here in Westminster Hall, I take this opportunity to thank the Minister - who I am pleased is still in his place - on what has been a very busy day!

I have worked with fellow members of the Communities and Local Government Select Committee scrutinising the Government’s landmark devolution legislation and - I have a vested interest in its success as the Member for Cheadle, - a constituency which sits within the Greater Manchester city region - a region which has already benefited from £7.6 billion of funding towards the Northern Powerhouse. Madam Chairman, good transport links are key to the success of the Northern Powerhouse.

Indeed the enabling powers in the devolution legislation are crucial for regional ambitions for business to deliver prosperity at a time when now, more than ever, effective connectivity and transport infrastructure from the suburbs to the city are more important.

And so I am grateful for the opportunity to raise this issue with the Minister, and therefore provide an opportunity for my constituents to be reassured that the Government is committed to building the Northern Powerhouse - to encourage investment in transport - and to underwrite our ambition as a city region that is easy to do business with. We need to fix traditional regional imbalances and transport is a vital element in this objective.

Madam Chairman Greater Manchester is a major region, with 2.7 million inhabitants - and in total our Government aims to spend £ 13 billion on transport during this parliament to support a growing economy and our increasing population.

And it is within the context of the Government’s devolution agenda that further powers will place transport choices in the hands of local communities - and thus the way that people travel and do business is set to change for the better, with a potential to generate local and international business - creating global connectivity for Britain’s second city.

As part of this, the 2040 Transport Strategy for Greater Manchester, and its consultation document which was released last week, is explicit about the need for transport to address long-term challenges in Greater Manchester which - though inclusive of - are not limited to our growing population.

Currently, South Manchester boasts transport infrastructure - which extends from the newly inaugurated regular direct flights from Manchester Airport to Beijing – an expression of global business confidence in our area - to our Metrolink.

And although it is yet to touch my constituency, I would be keen to urge a consideration of its extension in the context of the 2040 Consultation. During the consultation, I will want an assessment to be made of the logistics of this service as part of a long term ambition to deliver an extended Metrolink to Cheadle.

Madam Chairman, Greater Manchester’s constituencies may vary in their existing infrastructure - though we share many common problems. My constituency, Cheadle, with a population of just over 74,000, sits in the southern commuter belt of South Manchester.

As local plans are put in place to deliver the housing needs of the city region, our local road network is the infrastructure workhorse of our communities – and as growth is planned we must remember our roads are not just lines on a map, they are a vital means of how people live their lives. And there are clearly areas where roads are stretched beyond their capacity. A prime example of this is what was once a simple junction connecting the communities of Cheadle and Gatley but is now blighting the lives of pedestrians and drivers.

It is in the light of these pressures that I want to talk about the road network in my constituency - and one of the most pressing issue for my constituents is the Junction of the A34/A560 at Gatley.

Unfortunately, well-intentioned but small scale interventions over the past twenty years have not been sufficient to tackle the problems of this junction and make it fit for the future.

As one of the 5 busiest junctions in Greater Manchester it experiences passage of 74, 500 cars per week; in addition, Esure Insurance has found this junction to be the 6th worst in the country in terms of users jumping red lights.

Plainly the junction is operationally substandard.

This has placed strain on the wider road network, creating tailbacks onto the M60 just a few hundred metres away - and creating congestion for some length of my constituency down the A34 Kingsway. The M60 which has two slip roads onto the A34 further adds to local congestion and environmental challenges.

Over time, efforts to improve the working of the junction have included the creation of an eastbound left-turn lane for traffic approaching from Gatley, as well as installation of traffic signals on the nearby off-slip from the M60 to better regulate flow into the junction. It has benefited more recently from the Actuation systems to adjust signal timings in response to changes in traffic flow, but it remains a major problem for the area.

Long-term transport problems which were identified in the South East Manchester Multi-Modal Strategy (SEMMMS), first produced in 2001, are now due for reconsideration.

I look forward to the refreshment of this plan which is ongoing and I will be pressing for further consideration of an A34 corridor plan which will explore this road’s intersection with the M60.  This will enable TfGM to develop a more detailed understanding of the long-term growth implication along the A34 and identify further areas of improvement to manage congestion. These problems need to be addressed both immediately and for the longer term. This junction is broken and we need to fix it.

It is the fact that alongside Greater Manchester’s growing economic strength, creating new employment and development opportunities across the wider conurbation, including Stockport, pressure continues to be put on local highways networks. This is particularly relevant at junctions where there are complex flows of traffic wanting to access the City, Manchester Airport, the M60, M56 Motorways and of course, and importantly to my constituents, local facilities and residential areas.

Further pressures upon the general network and A34 corridor are also in the spotlight as the Greater Manchester Spatial Framework and the Cheshire East Local Plan are being drawn up.

It is clear that local plans must take into account the implications of increased developments, and where there are cross boundary transport infrastructure issues, it is vitally important to have cooperation between all stakeholders including central government.

I will highlight with the Minister however, the need for continued investment in the North, welcoming all that we have so far, but firmly focused on the North’s future. I have also stressed the importance of smaller infrastructure projects yes we need HS2 and HS3 but we also need to underwrite this ambition with support for large but more local projects.

I am pleased that for Members with problematic junctions, the Government has committed itself to investment, delivering the biggest road improvement program since the 1970s, and going forward, continuing this commitment will be an imperative.

Infrastructure investment represented by the £475 million Large Local Majors fund designed to support local transport projects is exactly an example of the type of investment funds we need in the wake of the referendum, and indeed more small scale projects need priority.

I have had meetings with both the Interim Mayor of Greater Manchester and the Strategic Transport Director of Transport for Greater Manchester to discuss applications for this fund and the role I can play in facilitating them. I would also like to encourage the Minister to continue to make local Authorities aware so that we can all benefit from the potential prosperity these funds can generate.

In my constituency, I will be looking forward to progress being made on the changes so urgently required on the Gatley junction and this will also be part of the further wider SEMMMs strategy.

I am conscious of time but I want to briefly touch upon the ambitious developments in High Speed Rail.

HS2 will sweep into the North, and I know I touch upon this program with a brevity that does not do justice to this important project. With phase 2a to Crewe opening in 2027, and the delivery of phase 2b marked for completion in 2033, there can be no further delay to the roll out of the UK’s largest infrastructure project so that the North can benefit from increased capacity to meet demand.

I look forward to the legislation being brought forward later this year for Phase 1 and though I appreciate the extension of timetables for delivery to allow process of petitions, I urge the Government to take steps to prevent further delays to the opening of this first step to high speed rail.

I am also pleased that this ambitious project will come close to Cheadle at Manchester Airport, and I am glad that the Treasury renewed its commitment to the Airport link.

Additionally, I welcome the commitment to modernise the rolling stock, from Pacer trains to the new stock following Arriva’s new franchise around Manchester, and I know passengers would welcome an increase in capacity and comfort for local journeys.

I would also like to highlight the need for investment in stations, particularly cross-departmentally working with CLG to improve station environments such as that at Cheadle Hulme Station in my constituency. In addition, Ms Chairman, I will be looking for greater responsibilities for franchises to invest in ticketing, to make it easier and more comfortable to travel.

Better bus services are also critical to unlocking growth in our communities, reducing congestion, supporting socialisation of the elderly and helping to improve our environment. Handing franchising powers down to local authorities will better enable them to tackle priorities for improvements that will increase passenger numbers and deliver more benefits.

These benefits must continue to include connectivity, and whether it be through smart cards or better branding, get more people to hop onto a bus rather than get in the car. Central to this is more frequent services. Recently the X57 service has been reduced and 373 withdrawn, taking a valuable link for constituents to work, home and hospitals away. I will be keen to see measures put into place that will enable local authorities to influence timetabling to better reflect the local need.

Furthermore, there is also the prospect of improving disability access, whether it be through innovative visual or audio capability or better disability training, so drivers know where to pull into at bus stops – and I have drawn local stakeholders attention to Muscular Dystrophy UK’s Trailblazers report on improvement to access for young disabled people.

Today, I seek the assurance from the Minister that both current and future transport programmes will continue to be funded as has already been promised. We all appreciate the changes now in train due to recent national developments but the future prosperity of the North and my constituency must be maintained.

Following the decision made three weeks ago tomorrow, there is a strong argument for more infrastructure investment and delivery and it is my position that this needs to take place both in the small scale and long-term large scale projects.

The Northern Powerhouse concept is crucial to the prosperity of not just the North West of England but the whole of the North and the country itself. If it is to succeed we must be committed to its funding, improvements to roads and junctions, the construction of HS2 and HS3 and the transport infrastructure of Greater Manchester in all its forms.

Undoubtedly, this is an exciting time for the Greater Manchester region. Now more than ever our attention is turning to the North, and power is moving from Whitehall to local communities a result of devolution. I look forward to the prosperity that I know this will bring to my constituents, to Manchester and to the North.