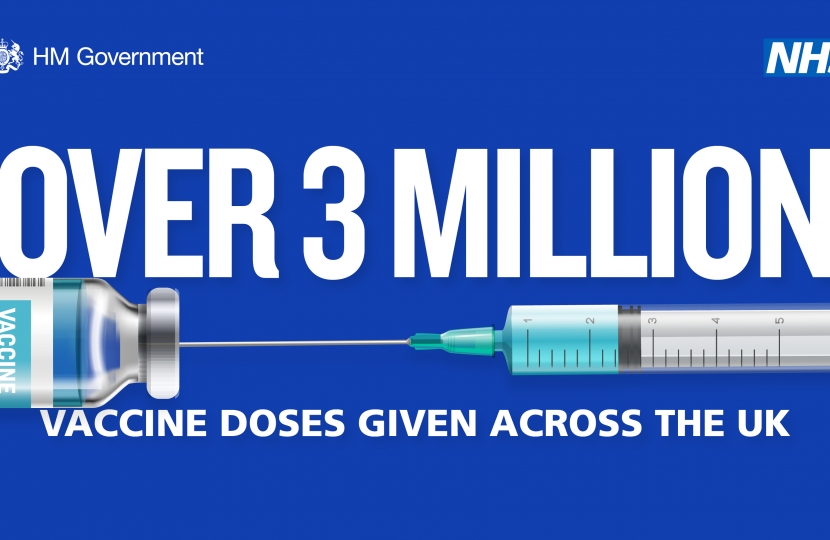 If you are in the first few priority groups, you will get called by your GP to offer your vaccine. You may leave your house and travel out of area for your vaccine, as this is a medical appointment.

Vaccines have been rolling out at high speed to those in the top priority groups. More than a third of over 80s have now been protected. Over 3 million vaccine doses have been administered. That's more than Italy, France, Spain and Germany combined!

Not only have we seen the approval of the Pfizer vaccine and Oxford vaccines by the end of last year, but the first few weeks of January have heralded the approval of a third vaccine, Moderna.

In more good news, we've also had 200,000 people sign up to assist with the vaccination roll out, in roles such as stewarding. A big thank you to everyone helping to deliver the largest vaccination programme in British history. If you would like to help, you can sign up to support our national effort here.

With hundreds of thousands of people being vaccinated each day, it's no surprise that we've vaccinated the highest percentage of our population in Europe, and we are the third highest in world. Despite having less than 1% of the world's population, our country has given out 10% of all vaccinations.

A fantastic achievement in mere weeks - a big thank you to all our healthcare staff!

Locally, vaccines are being rolled out at speed to the most vulnerable.

29 residents at Southfield care home in Gatley were amongst the first in our region to be vaccinated with the Oxford/AstraZeneca jab at the start of January.

And last weekend, residents at Southfield care home in Woodford as well as nearly 20 members of their staff received their vaccines, joining the bulk of care homes across the constituency.

In the borough, the majority of care home staff have already received their first dose of the Pfizer vaccine at Stepping Hill Hospital. In recent days we have also had the Eithad stadium open for mass vaccinations, as well as locations around the constituency.

Local care home staff have spoken of the emotional journey and their looking forward to being able to reunite residents with their relatives after only essential visitors being allowed in some care homes.

Vaccination is also a beacon of hope for the hard working staff, too. Many have made difficult decisions to not see their own children and grandchildren to avoid catching or spreading Covid to the residents they take care of.

We hope that by the end of January, everyone in care homes will have been vaccinated.

Again, a huge thank you to everyone that has worked so hard to make this possible.