Changes to Benefits System for the Terminally Ill 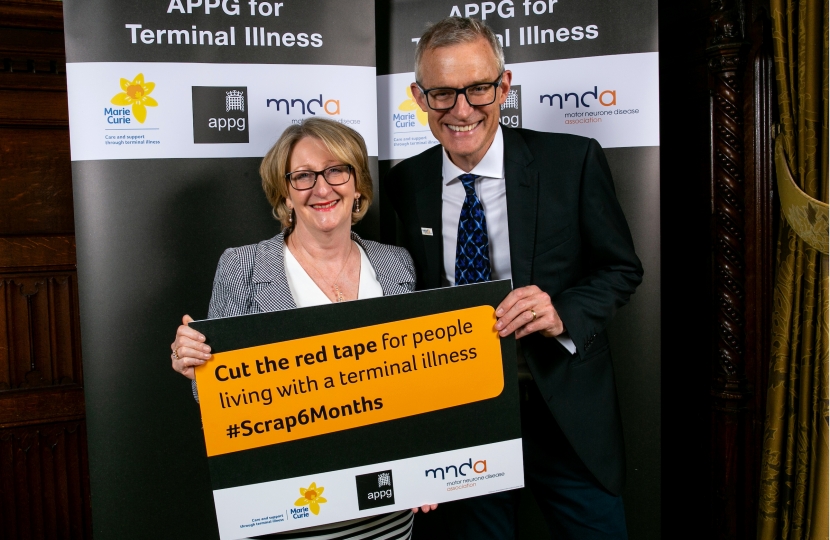 TV and radio presenter Jeremy Vine and I came together with Marie Curie and the Motor Neurone Disease Association to mark the release of a new parliamentary inquiry report, and campaign for a change to the benefits system for terminally ill people.

A report from the All Party Parliamentary Group (APPG) for Terminal Illness found that the current rule that you must only have six months or less to live to get fast access to benefits is ‘outdated, overly-time consuming and demeaning’.

The APPG recommended scrapping the ‘six-month rule’ and adopting a new definition of terminal illness, based on a new law in Scotland that will allow clinicians to use their own judgement to certify if a person is terminally ill, with no arbitrary time limit.

Secretary of State for Work & Pensions Amber Rudd subsequently announced a review of how the system supports terminally ill people. This evaluation will hear directly from people affected by the current rule and look at how different systems work across the globe.

Greg Broadhurst, Local MND Association Campaigner said: “I would like to thank Mary for her continued support during this campaign, and for coming to meet with us at the recent Westminster event. Mary, along with other MP’s across Greater Manchester, has given the Scrap Six Months campaign fantastic backing, and I’m thankful for the collective support across our branch area.”

I’m proud to lend my support to this campaign and was delighted to hear about the review into how the system works. What was uncovered in the inquiry shows that there is so much room for improvement and I’m glad that this issue is getting the attention it deserves.

As the Withdrawal Agreement Bill continues through Parliament, I would like to reassure you that protecting vulnerable children remains a key priority . Indeed, we have a proud record of doing so through our asylum system and our resettlement schemes.