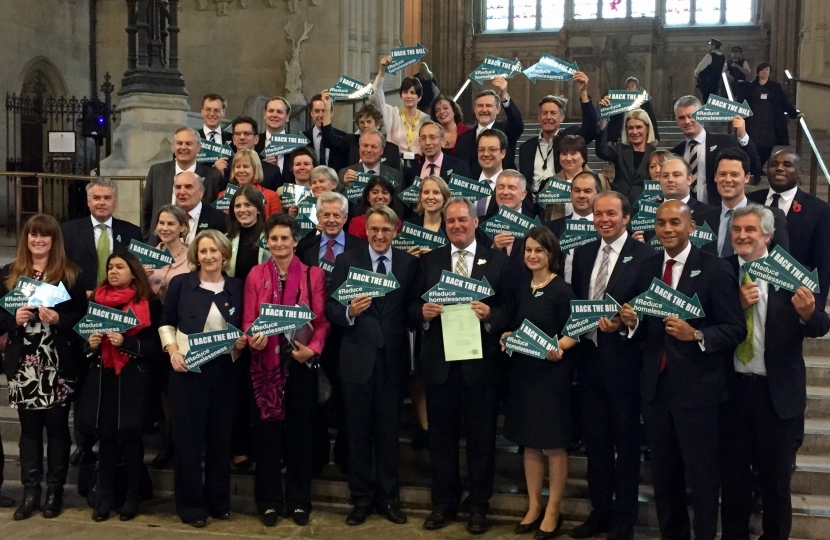 It is a pleasure to follow the hon. Member for Westminster North (Ms Buck), who highlighted with great passion her constituents’ complex needs, which the Bill is designed to address. ​It is also a pleasure to rise in support of the Bill. I begin by congratulating my hon. Friend the Member for Harrow East (Bob Blackman) on introducing this truly historic Bill. I commend him not only on his stewardship of this landmark Bill, but on the incredible campaign that he has led to bring it to this stage.

As a member of the Communities and Local Government Committee, I was pleased to take part in the prelegislative scrutiny of the Bill. Today I am pleased to join other Members in the House who not only support the Bill but who, like me, are co-sponsors. The Committee’s inquiry on homelessness shone a light on many of the issues that my hon. Friend has taken up and addressed in the Bill. I join colleagues in paying tribute to the homelessness charities across the UK—particularly Crisis UK, St Mungo’s and Shelter—which gave us their time and specialist knowledge, met me privately and advised the Select Committee on this groundbreaking legislation.

During our inquiry, we saw some incredibly brave people, who came before our Committee to speak about their experiences and share their stories of being homeless or sleeping rough. They gave powerful, personal evidence of how vital the first steps in getting help were; how the first contact with their local authority, at the front desk, can inform their future; how important that point in their story is; and how often it can determine whether they have a home or a future on the streets. I commend the work of staff in housing offices across the country, but we have heard that there is a real disparity in the quality of service received by people who need help. That disparity was explained by Mateasa, a young woman who used to be homeless and who now acts as a mystery shopper for Crisis. She told us that she was constantly surprised by the different experiences that she had when approaching local councils for assistance. She said:

“As I approached them under cover, I was an eighteen year old girl who had been kicked out of her house by her parents. Generally the stereotype around that would most probably be that it was my fault: that is the reason why I was homeless. A lot of the time I was advised to work out what my problems were with my home life. I was never asked if I was being abused by my parents or what the problem was.”

Changes proposed in clause 2 of the Bill to section 179 of the Housing Act 1995 place a duty on local housing authorities to provide advisory services that give information and advice, and that are designed to meet the needs of, among others, victims of domestic abuse, persons suffering from mental illness or impairment, and care leavers.

I welcome provisions in the Bill that make it easier for care leavers to show that they have a local connection with both the area of the local authority responsible for their welfare and the area in which they lived while they were in care, if those were different locations. That matters, because it will oblige local housing authorities to provide advisory services, or to secure the provision of information free of charge, to prevent homelessness and make people aware of their rights. We must ensure that those protections are robust enough to secure adequate safeguards for these at-risk groups.

I would like to draw attention to the plight of vulnerable women and girls. St Mungo’s reports that 44% of its female clients have experienced domestic violence, 19% experienced abuse as a child and 32% said that domestic violence contributed to their homelessness. The changes to section 179 of the 1995 Act will mean that housing authorities have to provide or secure a service that gives women and girls who are in such dreadful situations protection from homelessness when it is most needed.

The same applies to individuals suffering from a mental illness or impairment. Research published in February this year found that four in 10 people who sleep rough have a mental health problem, and that they are more likely to be stuck sleeping rough for longer than a year. That is a major problem that the Bill seeks to address. Clearly, early intervention and prevention have the potential to make a positive impact on the lives of such vulnerable people.

That is why I welcome the core principles of the Bill. It introduces requirements for local housing authorities to carry out prevention work, with the formulation of a personalised plan. Ultimately, the legislation will need broad co-operation to bring about a cultural change whereby we focus efforts on prevention instead of intervention at crisis point. As I have said, the fact that there are disparities in service quality came across strongly from the evidence given to the Committee. I am pleased that the Bill will help to ensure that people know what their rights are and how they ought to be treated, and that girls such as Mateasa who turn to their local authorities for help are treated with kindness and respect, and given the advice that they need to prevent them becoming homeless.

It is a privilege to serve on a Select Committee that has taken such an active role in not only inquiring and reporting on such an important issue, but scrutinising and supporting the Bill. I am pleased to stand in the Chamber with so many Members of this House who share the common goal of reducing homelessness. I believe that the Bill will go some way to achieving that aim.