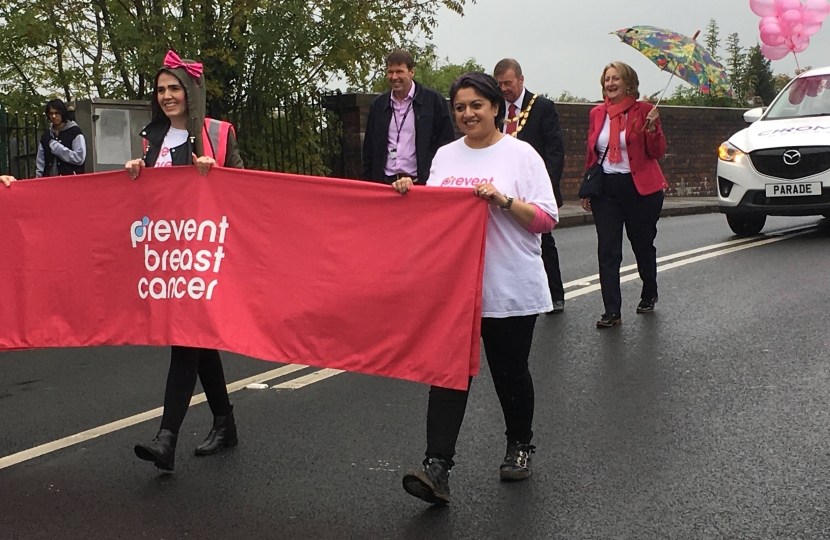 On Saturday 30th September, I joined residents and campaigners from across the community at the Pink Parade in Cheadle Hulme, in aid of Manchester based charity Prevent Breast Cancer’s “Paint Your Town Pink” fundraising initiative.

Prevent Breast Cancer is a charity which focuses solely on fundraising to ensure the continuation of research which has the potential to prevent breast cancer for future generations. “Paint Your Town Pink” is one of the main fundraising initiatives in their calendar each year during Breast Cancer Awareness Month, and last year it raised over £14,500 in Cheadle Hulme. The Pink Parade this year brought out many participants and supporters including the Deputy Mayor of Stockport, Cllr Walter Brett, despite the weather!

The parade route went from Governors House on Ravenoak Road to Oak Meadow on Station Road, where a number of local businesses had set up stall at an artisan market to show what Cheadle Hulme has to offer. There were games, arts, crafts and food on hand to greet the Pink Parade and people from across the community who had come out in support and to enjoy an afternoon out.

It was a pleasure to support the Pink Parade and Paint Cheadle Hulme Pink again this year. This is a wonderful event which has such an important role to play in raising awareness of a serious but preventable illness, and after the success of last year’s event it’s great to see it return. I was heartened by the support local residents showed as we painted Cheadle Hulme pink through wind and rain!