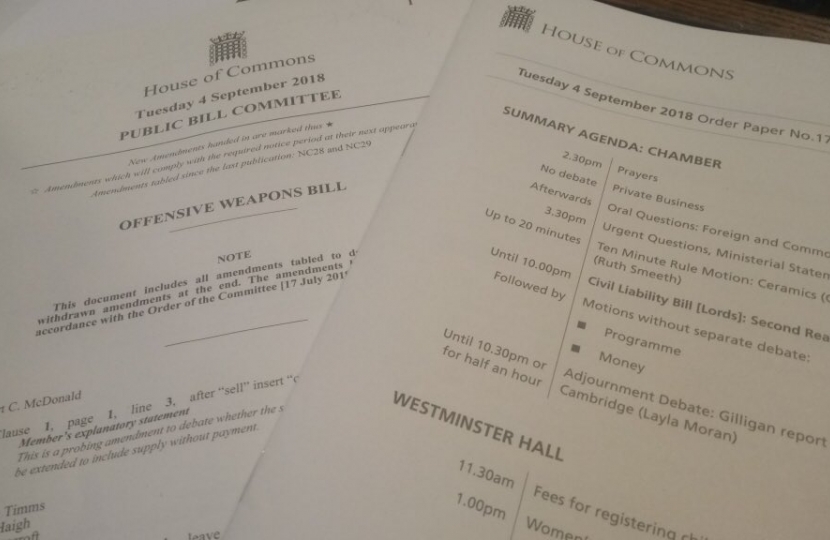 Like many residents across Stockport, I’ve enjoyed the summer weather and the opportunity to attend events and spend time with family, and I know how important it is that we all feel safe as we do so. Before I began my summer break, I started work on a new piece of legislation designed to close loopholes and strengthen the law around dangerous weapons, which aims to keep us all safer.

In July I was appointed as a member of the Public Bill Committee for the Offensive Weapons Bill, where alongside colleagues across all parties I began to scrutinise this important piece of legislation. The measures proposed in these new laws aim to combat rising levels of violent crime, and make the law in this area fit for purpose in an age where obtaining dangerous weapons and substances is easier than ever, especially online.

It is worrying to see an increasing number of news reports detailing attacks that have been carried out using acid, knives and firearms, and it is the use of these types of weapons which we want to tackle.

Acid attacks in particular are life-changing and despicable. Between January 2016 and May 2018 there were just over 2,000 acid attacks recorded by 30 Police Forces. The Offensive Weapons Bill would create two new offences to address this: Firstly, possessing a corrosive substance in a public place, and secondly, selling certain harmful corrosive products to under-18s.

I am also particularly concerned about online knife sales, and share the worries raised with me by my constituents, who were shocked to learn that their children could purchase them so easily and discreetly. It is right that we look to restrict the ease of access to these dangerous weapons, and the new law will place restrictions on online sales, as well as on deliveries to residential premises.

We’re lucky to live in a society with relatively low levels of gun crime, however the legislation aims to strengthen existing firearms laws too, by reclassifying certain firearms as “prohibited weapons”.

People have the right to feel safe on the streets and in their homes. It’s vital that we crack down on the kinds of crime which have sadly been so prevalent in recent news reports, and these new laws aim to help to help tackle this issue.