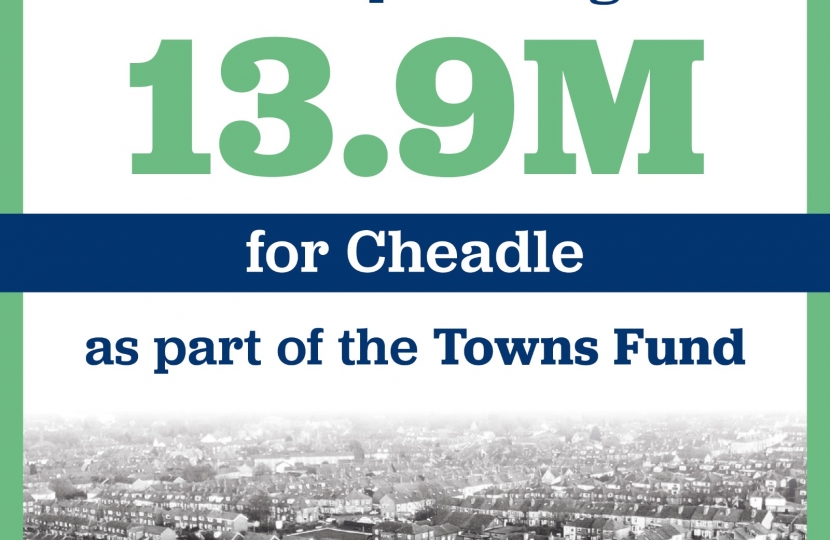 £13.9 million has been allocated in the Budget announced by the Chancellor today to Cheadle, after a successful bid from Cheadle Towns Fund board, on which I sit. We recently presented our bid to Government for the Towns Fund Initiative, which sees eligible areas in the running for millions of pounds worth of investment into their town.

With almost £14 million of funding for projects including a new train station in Cheadle, active travel infrastructure programme and a low carbon eco-business park, the Towns Fund Initiative regenerates and provides jobs for the area.

The multi-million-pound announcement comes after half a million was allocated to Cheadle for ‘shovel-ready’ projects late last year, which could potentially include improvements to local parks including Diamond Jubilee and Abney Hall, and high street cycling and walking proposals.

Work continues on the business case for reopening a train station in Cheadle, which surveys by the Towns Board, made up of local leaders, showed was highly popular amongst residents and further transport bids have also been submitted.

The Towns Fund was first announced in September 2019 by the Prime Minister, and 45 towns in the UK have had their successful bids for varying amounts of funding approved today. The funding is aimed at revitalising high streets and kick-starting economies as the country begins to build back better after the pandemic.

It is brilliant news that the Chancellor, in his Budget this week, has announced £13.9 million as part of our successful Cheadle Towns Fund bid. This is in addition to the half a million pounds of ‘shovel-ready’ projects, that have already been signed off.

Funding is on the way for our active travel infrastructure and low carbon business park plans as we continue to bring the strands together on the business case for the reopening of Cheadle Train Station as part of the Towns Fund Initiative bid. Residents overwhelmingly backed a train station in Cheadle to both bring and connect us to opportunity, and I will continue working to deliver this.

This funding is all about recognising the vital role that the high street plays in our community and local economy. This boost, alongside a raft of other financial packages and measures, will ensure that Cheadle is able to bounce back as we begin lifting restrictions this year.

This news is fantastic for our area, especially for local jobs and ensuring that we keep the green agenda at the heart of all that we do. Thank you to my fellow Towns board members for their hard work on behalf of our community over the last year and their continuing work as we champion Cheadle.

I was pleased to hear that judges have quashed the conviction of 39 former sub-postmasters. This injustice has been ongoing for more than 20 years, with over 700 prosecutions based on false evidence. This judgement is a vindication of the sub-postmasters’ long fight.